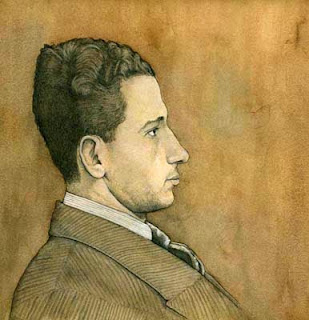 Apologies for the slowing down of posts since the beginning of the new year but as I have mentioned earlier I've been busy with other projects. As most people who freelance surely know, work schedules can be far from concrete and routine.

In that time though I have managed to finish up another portrait to add to the series. This time around is the lesser known Sholem Bernstein, a low level operative of the Brooklyn / Brownsville troop of Murder Inc. soldiers.

Bernstein was a talented car thief whose services were instrumental in procuring getaway cars that would later trace to a dead end in an investigation. Nothing of much importance was ever given to Bernstein further than placing his hands on the ten o'clock and two o'clock behind numerous stolen steering wheels, and pushing down on the gas. Sholem, who some called Sol, drove the getaway car at the fateful murder of candy store owner Joseph Rosen in 1936. Rosen was a former garment industry worker whose trucking business had been forced into retirement by Louis 'Lepke' Buchalter's powerful influence over labor racketeering in New York. Rosen was set up with a small candy store in Brooklyn by Lepke in order to try to help the man support his family. This was after a few missteps Rosen had working for a couple of other trucking companies under Buchalter's control. The candy shop faltered and Rosen, understandably embittered towards Buchalter, demanded financial reprimand and rumors flew that the candy man was looking to blow the whistle on Lepke's empire with one quick visit to Thomas Dewey's office.
Emanuel 'Mendy' Weiss was one of Bernstien's passengers on the Sunday morning of September 13 when Rosen was face down on the floor of the candy store, his body host to seventeen bullet holes. Joe Rosen's murder seemed perhaps inconsequential at the time to Lepke, who had overseen and ordered numerous syndicate hits, all calculated carefully, but this one would later prove to be the foundation of his downfall, and lead to his trip to the electric chair in 1944.

Inevitably Bernstien's minor stature in the underworld of Kings County manifested him into an easy pushover for the borough's District Attorney William O'Dwyer and prosecutor Burton Turkus. Looking at an extended trip to Sing Sing, Bernstein folded like an old accordion and was holed up in room 622 of The Half Moon Hotel in Coney Island soon after; his neighbor in room 623 was Abe Reles. He was one of the four important turncoats under police protection, along with Allie 'Tick Tock' Tannenbaum and Mickey Sycoff, who were across the hall in room 626.

Tannenbaum and Bernstein were key figures in Buchlater's trial for the prosecution. Tannenbaum's corroboration of the Rosen murder, and the eye witness account from Bernstein, sealed Lepke's fate along with Mendy Weiss.
Amazingly enough, court transcripts from the trial detailed that Bernstein's attempted an extortion racket while passing the sometimes agonizingly long hours under lock down at the Half Moon (he, along with the others were there for over a year). This was done through threatening letters sent out to potential victims who shady past he was acquainted with in the old neighborhood. These paper threats passed through the hands of the policemen on duty who were unaware of their content, onto their intended mark. The scam however proved unsuccessful.

Like Allie Tannenbaum and Abe 'Pretty' Levine, Sholem Bernstein disappeared from sight and was never heard from again following the fall out of the trials and subsequent string of executions.
He and Tannenbaum did make court appearances in 1950, when Abe Reles' case and a probe into police corruption was reopened by the serving District Attorney Miles McDonald (O'Dwyer had gone on to be New York's 100th Mayor in 1945). Appearing like hoodlum ghosts out of the past, Bernstein and Tannenbaum made their statements and answered questions then quickly faded away once again, their post-Murder Inc. days still remaining a mystery to this day.
Posted by Pat Hamou at 9:31 PM

Cool art. I couldn't find a "contact" button on your blog, but I was wondering if you could create a link to www.zarts.com? Thank you

Sam, perhaps get me more details first on the site you'd like me to link
thanks

Hi,
This is such a great resource that you are providing and you give it away for free. I enjoy seeing websites that understand the value of providing a prime resource for free. I truly loved reading your post.
Thanks!

Having read this material, I have learned for myself a lot of the new. Thanks http://www.collegeboard.org/

What happened to Sholem Bernstein after he was released from the Half Moon?

hey richard - as mentioned in the last paragraph, both Bernstein and Tannenbaum resurfaced when the Abe Reles case was re-opened in 1950 and disappeared soon after. I think the Muerder Inc experiences for both of them was enough to scare them off a life of crime for the rest of their days.