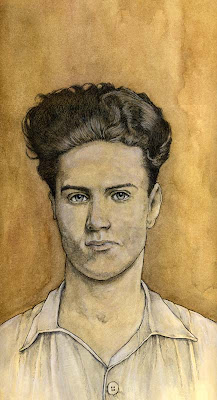 The first generation of Brownsville's bullies, who had laid down the foundation for The Combination, kept their eyes open in search of young street kids to trap into their web with promises of easy money and street stature. The criteria simple: look for drifting, aimless kids who’ve quit school and perhaps had a tempestuous relationship with their parents, and whom, despite being hard honest people, were trapped in a cycle of low income opportunities. When Harry Strauss spotted the wayward fifteen year-old Abraham Levine, he fit the bill.

Levine was one of the young recruits the Jewish division of Murder Inc. lured into their snare, alongside the likes of Sholem Bernstein, Oscar ‘The Poet’ Friedman and Mikey Sycoff. To kids like young Abe, men like Strauss, Abe Reles, and Meyer Goldstein were neighborhood giants in size seven shoes who were respected and feared. While they saw most of the neighborhood adults as cowering and sheepish, these romanticized hoodlums towered in mistaken idol worship from these misguided teens. This type of hero worship even rivaled the like of baseball’s ‘Hammerin’ Hank Greenberg by many young Jewish kids at the time, depending on what side of the street you were from.
Surrounded by broken nosed mugs and thugs only a mother could love, it wasn’t hard for Levine to earn the moniker of ‘Pretty’. Graced with inviting blue eyes, soft features and wavy black hair, Abe may have quite likely made many a girl do a twirl while strolling along Pitkin Avenue in search of an egg cream.

Strauss put the teenage Levine to work and gave him a partner, Anthony ‘Dukey’ Maffeatore. Dukey came from Brooklyn’s neighborhood of Ocean Hill, the district nudged in as a sub-section of Bedford-Stuyvesant, and where resided the Italian delegation of Murder Inc. whose members were under the supervision of Louis Capone. Dukey’s spoken English was broken at best, and Lil’ Abner and Buck Rogers were his literary accomplishments.
Time passed as Levine and Maffeatore bonded and grew close as friends as well as being criminal colleagues, and handled most jobs thrown their way - running errands, small time extortion, collecting graft, stealing cars and license plates - low level gigs but crucial to the big wheel of operations. They were also the ones who matinee-ed in September of 1939 at the Lowes Pitkin Movie Theatre when the missing Irving ‘Big Gangy’ Cohen’ was spotted on the silver screen in Golden Boy almost two years after his disappearance into the Catskills’ forest.

Levine was picked up and booked on numerous occasions over a period of five years though charges never seemed to stick. According to 1938 NYC Police arrest records, Levine had strayed away from Brownsville and settled in Williamsburg at 104 India Street. His bertillion card listed his occupation simply as a clerk. By that year at the tender age of twenty-two, Levine was becoming a simple family man at heart, marrying young and starting a family now that his wife was pregnant. Fatherhood probably caused him to ponder more than once the implications of his criminal career more seriously and the possible fateful road he could find himself on.

The anxiety of leaving behind a pregnant widow was severe enough that he approached Abe Reles about getting out for good at some undetermined point. In pleading his case to the Brownsville chief, he argued that he had actually never murdered anyone and was really just a glorified chauffeur more than anything else. Reles, not generally know for his ‘warmth’ but still a family man himself, seemed moved enough by Levine’s plea to broach the subject with his colleagues. He was met with fierce resistance, especially from Strauss. Levine had been present at enough jobs to do considerable damage in court if he flipped; case in point the Walter Sage killing in the Catskills. Reles tried to assure them the kid would never sing, and just wanted a better life for him and his new bride while there was still time. The answer was a resounding NO from Goldstein and Strauss, and Reles should know better than to even ask. The discussion wedged a slowly ascending rift between Reles and the rest of the crew from that point on, and Levine was backed into a corner as a result and continued to soldier on despite his dilemma.

By 1940, the Brooklyn District Attorney would take care of the problem for Levine. The mobs of Kings County came under fire once William O’Dwyer opened the books on the countless unsolved murder cases that plagued the borough. Along with prosecutor Burton Turkus, a clean and sweep of Brooklyn’s undesirables and hoodlums included Pretty Levine, after his pal Dukey was picked up and broke down under interrogation and named him as his partner. Levine had recently been rather irked with Reles at the time he was rounded up for questioning. In hopes to get some help with medical bills incurred from his wife and young daughter, Levine went to Reles for a loan. Reles agreed but at the same rate of interest he passed along to anyone else on the street – which left Levine fuming at Reles’s insensitivity to his financial woes after years of loyal service though he had no choice but to accept the offer.
Surprisingly – he held tight-lipped under hot lights without playing stoolie at least for awhile, as he feared Reles more so than he started to loathe him. Eventually he gave in after his wife was jailed as material witness; a simple but effective chess move on the part of O’Dwyer and Levine started to talk. His fears were lessened and his loyalty to the Brownsville mob crumbled once Reles started to sing louder to the law than anyone else in the following weeks.

O’Dwyer knew he only had a small fish in Levine – but he was a step to catching the inner-circle, and he also proved to be a key factor in closing the case of the missing Walter Sage in Sullivan County. At his offering to ante up his plea bargain, he took the authorities up to Loch Sheldrake in the Catskill Mountains to point out where Sage’s body, ice picked and tied to a pinball machine, was dumped into the lake by Harry Strauss. Allie ‘Tick –Tock’ Tannenbaum, also playing pigeon at this point (and the coop was getting empty), corroborated his story. Levine was eventually handed a suspended sentence and shown the door for his collaboration.

In the end, after Abe Reles, under witness protection, was thrown out a seventh story window of the Half Moon Hotel, and all Brownsville’s top brass were singed at Sing Sing, but history has lost its link to what had happened to Abe ‘Pretty’ Levine.
Civilian life was more than likely incognito and whose to know if he pulled up roots from Brooklyn and seeked a better life somewhere else. He was only just twenty-five years old by the time the dust settled, plenty of time to start all over and stay on the straight line.

I bet he ran off with his wife and raised his child(ren) away from all that.