Half Hour At The Half Moon 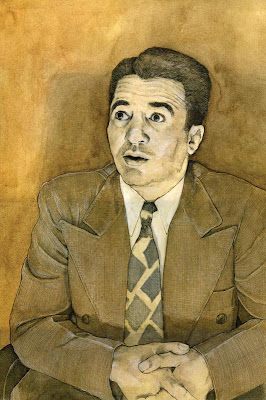 At about eleven PM, Rose Reles closed the door behind her as she left room 623 of The Half Mood Hotel, located on the Boardwalk at West 29th Street, Coney Island, Brooklyn, New York.
Her eyes, circled dark and discolored from the stress of the last year, were rimmed in red with tears. She shuffled past policemen on duty at the end of the corridor as she buttoned the top of her dark coat and prepared to brace herself for the late autumn chill and cold breeze blowing in off the Atlantic Ocean, which seemed somewhat larger and particularly menacing this evening. Six floors below, as she exited the hotel preparing to return home to Brownsville, she looked up at the Half Moon one more time and wondered: “How could I ever have married such animal…? ”

Back up in room 623, Abe Reles simmered with anger and spittle still gathered in the corners of his mouth from the last forty-five minutes of arguing with his wife. Rose had asked for a divorce.
“A fuckin’ divorce!” he yelled to no one in particular and everyone.

Outside of a few visits to the hospital, court and testimonial appearances, and a trip out to Los An 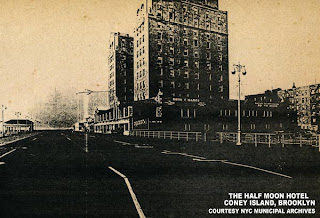 geles with Allie Tannenbaum, he had been in this damn hotel and the occupant of room 623 for almost a year. The reason he was here in the first place was because of Rose and the kids. He also wanted to protect Pretty Levine.

He was good looking kid, confused is all, and shouldn’t be part of this “life” he told himself.
“So I turned on my friends, went stoolie, entertained DA William O'Dwyer with pages and pages of confessional mumbo jumbo. All the news that’s fit to print, like that fancy New York Times paper likes to say. Now she wants out? No way, not after all this…they’re all I have left”

Allie and Sholem Bernstein were down the hall, in the same squeeze he was, doing the same time, singing the same song. Tick Tock and Sholem were playing cards. Again.
Not tonight thought Reles.
“I’m just gonna lie down for while and listen to the radio...”

Abe Reles sprawled on his back as bedsprings of the single bed squealed and creaked underneath him. He threw his disproportionately long right arm over his eyes and thoughts begun to tumble in circles; about how he found himself in this room, and what he had done to his pals since he made his decision to turn rat while sitting in that “stinking awful Tombs prison” back in March of 1940.

“ They would of done the same…” thought Reles.

“What was I suppose to do? The DA had me backed into a corner; my nuts were in a vice and it just got tighter. Rose got so delirious and hysterical on me; and she was pregnant with another kid. I was only 33, still a lot of time to restart a new life, something legit – even that lunch counter was starting to do OK and turn a little profit. I gotta good memory as I kept them DA secretaries busy night and day filling up notebooks and documents with details on various hits and missing bodies. I knew enough legal jargon with all the time I’ve spent in the court and in the clink – corroboration – that’s all you need.”

“Lookit Gangy *..., that crazy son of a bitch scrammed to Hollywood, he knew this was no life. It’s exhausting being tough guy twenty-four hours a day; being the boss; dealing with nutjobs like Pittsburgh Phil.”*
“Heh, I heard the hothead wasn’t too happy about my squealing, and some cop down the hall whispered to me that he’d spent all his money on legal fees and to put up a bounty on my head. I still can’t believe he grew a beard and stopped cutting his hair to convince folks he was ‘crazy ‘ and ‘unfit’ for trial. Well, he was right about the crazy part. Hard to believe they already cooked him at Sing Sing back in June…the same day as Meyer”*

“Ah Buggsy, when we were kids nothing could stop us. We flipped the bird to the eighth grade and never looked back. When we had trouble with Shapiro brothers, we really took ‘em to the mattress huh? Those Amberg brothers got a lesson as well. Thanks to you we linked up with the wops in Ocean Hill and then Lepke and downtown Manhattan came knocking at our door thanks in part to Louis* and Albert A.**”
“There was a time I would of done anything for Lep, but we gotta look out for ourselves. He was the big man, we were loyal, and the money rolled in. He was always amused at your insistence that Edward G. Robinson stole all his movie mannerisms and talking out of the side of the mouth from you. Kids in the neighborhood always thought you were he as well. You always said: “He’s a kike like us and all he plays is wops in the pictures. That ain’t right!”

“I’m sorry pal that I ratted you out.”
“It wasn’t easy for Blue Jaw* either when he took the stand against you. He told me after that you had tears in your eyes, but he couldn't tell if it was from rage or sadness”

“What can I, or Allie, or Bluejaw; Sholem; Pretty; and others say that would make it any better? We jumped ship like rats to save our own skins. We had no choice. They even nabbed Oscar The Poet*. Cripes, that guy was just a driver and dumb as a bag of nails”

“And they got everybody rounded up: Mendy*, Charlie The Bug *, Louis Capone, the Dasher, Happy, - a regular Brooklyn sweep up. Midnight Rose’s must be awfully quiet these days…”
“But we are prisoners too, just in different kinds of prison. I know how many wanna see me dead! Sliced, diced, and served for lunch on Lansky’s desk.”

“I ain’t seen my kids in over a year. I’m fat, unhealthy, and bored.”
“I play pranks on these cops guarding me just to keep amused. They are complaining I smell and should shower. Fuck ‘em”

“And it ain’t over. Next up I gotta testify against Albert A and boy, that’s gonna be a doozy…”

Abe Reles then turned on side, flatuated and feel asleep.

Just a little after 7 AM, a policemen poked his head in to check on Reles and saw he was asleep, a light snore rising from beneath the sheets. The cop then wrinkled his nose at the smell emanating from the small hotel room and closed the door again.

A short time later, with early morning light pouring through the window on an overcast day, Reles, in a slumbered haze, half-heard a distinct click as the doorknob turned left and the door opened. He could barely make out the shape before him through half closed eyes…

Sixty-seven years ago at around 8AM on the morning of November 12, Abe Reles lay dead forty feet, five stories, below his hotel window. Knotted bed sheets hung from the window connected to a 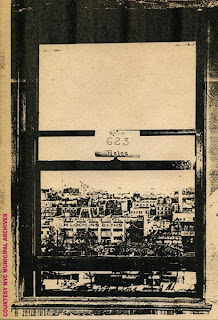 wire that was tied to the inside radiator. The bed sheets stopped at about halfway the length of the fall. He was fully dressed. His back was broken in two places and vital organs ruptured. His face was cut from the impact of hitting the pebbly roof that extended out from the hotel’s second floor. His body was over twenty feet from the wall. It was surmised later by investigators that he landed butt first and bounced forward like a 150lb ball in a cheap suit.

On the sixth floor of the Half Moon, six policemen were on ‘duty’ when word got out.
“What happened?”
asked one arriving for the morning shift.
“Abe Reles went out the window”


William O'Dwyer got a phone call at his office. He slammed the phone down, put his head in his hands, and proceeded to rub his temples.
Allie Tannenbaum, a few doors down from room 623, couldn’t keep his hands from shaking.

In Los Angeles, Benjamin Siegel was still in his silk housecoat and slippers trying to focus on that morning’s Los Angeles Times when a phone call came in from the east coast. Minutes later, he hung up the receiver in his study, smirked to himself, and reached for a Cuban cigar.