Blame It On Brownsville 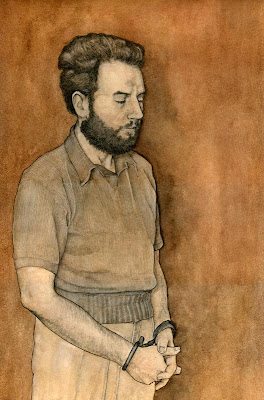 “He was vicious as a Gestapo agent, as casually cold-blooded as a meat-grinding machine in a butcher shop”

Harry Strauss, aka ‘Pittsburgh Phil’ aka 'Pep', was only thirty-three years old when he was walked down the hall to face his end in the electric chair at Sing Sing Prison. June 21, 1941 was the day Strauss exhaled for the last time. His execution also marked the passing of probably the most vicious and violent period in Jewish Gangster history.

A shift had seemed to occur in some Jewish criminal behavior with the onset of the Great Depression. With certain character traits leading down in darker and more violent places, the sociopath ante was raised by a few degrees. While no street gangster was a saint by any means, a certain sense of social responsibility to their community seemed to have guided the likes of Big Jack Zelig and Dopey Benny Fein from time to time, and gave thought that a heart did lay underneath the tough exterior and street wise antics.
Perhaps the surroundings in which they were raised had something to do with it. The Lower East Side still echoed much of the daily struggles of its population and therefore bestowed early leaders with a sense of pride in the protection they provided to the street.

However, across the East River in the tough section of Brooklyn called Brownsville, where many Jewish families settled after escaping the narrow streets of lower Manhattan, a meaner, more selfish Jewish thug had emerged.
Some were first or second generation American born.
Some were mere toddlers when The Herman Rosenthal affair had made headlines and threw the Jewish community into a social dilemma.
Some were barely educated.
And some grew to be some of the most brutal hit-men on record.

The Brownsville troop earned top spot by killing other Jews who were led by three brothers named Shapiro. There were no ethnic allegiances in Brownsville – just territory and dollars. A three-headed beast named Abe Reles, Meyer Goldstein and Harry Strauss led this violent and victorious troop of new soldiers for almost a decade during the dirty ‘30s. Of the three, Strauss, was known in certain circles as ‘a piece of work’.

Strauss was an intimidating figure in his camp as his hulking figure towered over most around him who only hovered in at the 5’ 5” zone even with lifts in their shoes. His background leading up to his days at Midnight Roses’ remain as mysterious and his sobriquet is misleading.
Pittsburgh Phil had apparently never been to Pittsburgh.
But Pittsburgh Phil loved his work.
Reports like to claim that Strauss had taken over 500 'contracts' willfully during the heydays of ‘The Combination’, dubbed ‘Murder Inc.' by the press. That unbelievable figure was probably exaggerated by the nation wide media frenzy that ensued once the boys from Brownsville were in court during the second half of 1940 and their dirty laundry displayed.

It seemed however that the actual act of killing didn't bother him at all, and he approached the ordeal in the same casual manner as a butcher hits a fresh side of flank. Without being tied down by family responsibilities like many others in the gang, Strauss criss-crossed America on assignments like a salesman with suitcase full of ice picks and rope. Apparently only one contract failed in the hands of Strauss while on duty in Florida.
Following his victim into a movie theatre, with plans to do him in with the theatre's handy fire axe, his target kept changing seats so often during the film that Harry quit out of disgust and frustration. Most others however were not so lucky; like poor Walter Sage, who was ice picked over thirty-six times, tied to a pinball machine, and dunked into Loch Sheldrake Lake in the Catskill Mountains.
It was however the murder of Irving ‘Puggy’ Feinstein that would prove his undoing when Abe Reles decided to sing to the Brooklyn D.A.
Under the orders of Albert Anastasia relayed by Louis 'Lepke' Buchalter, Strauss, along with Goldstein, tied up Feinstein in Reles’ kitchen while his mother-in-law was asleep in the next room. The rope was fastened and tied in a manner that any struggling would tightened the rope around his neck, eventually strangling its victim. Feinstein’s body was then dumped in a vacant lot and set on fire.
Any possible grace of the old world order in the days of the Eastmans, Zelig, and Fein, was definitely gone.

Harry Stauss was arrested, along with Buggsy Goldstein for the murder of Puggy Feinstein after Reles said a mouthful to the D.A.’s.
Without much to build up a defense on and little hope in beating the trip to the chair, Strauss decided to play the ‘nut card’ during his time leading up to the trial. He stopped shaving and grew out his hair. His ulcer acted up as well and he requested milk on a regular basis. In court he conceded to pleading insanity, playing out the role with courtroom antics such as chewing on his lawyer's briefcase continuously until the prosecutor ordered him to stop and also sent him to a barbers chair before further proceedings. In desperation, Strauss offered to turn state’s evidence in exchange for five minutes in a room with Abe Reles (long enough to cut his throat one could only assume). The authorities didn’t buy it, and neither did the jury buy his instability plea. Strauss, who was tried alongside Goldstein, was found guilty and sent up to Sing Sing to meet his fate. Despite his success as Murder Inc.’s top torpedo, Strauss died penniless, having spent his entire wealth on legal fees and a bounty for Reles's head.

Thanks Dominic - it was nice to veer away from the usual reference material of mugshots and the like for the portrayal...

There seem to be differing opinions on the meaning of "The Combination".

1. Some authors, for example Paul R. Kavieff - The Life And Times Of Lepke Buchalter, think it refers to the group of killers dubbed Murder Inc. by the press.

2. Some, for example Rose Keefe - The Starker Big Jack Zelig etc, consider that in and around New York there were many "Combinations", i.e. groups of gangsters.

3. Harry Grey whose autobiography The Hoods was first published in 1952 makes many references to The Combination and The Combine. It is clear that he considers this to mean the criminal syndicate formed in Atlantic City in 1929 by Frank Costello, Lucky Luciano, Meyer Lansky, Dutch Schultz, Al Capone, Buchalter and other mobsters.

It is a shame that so little is known of Strauss's background. You are on eof the few writers on this subject who has attempted some sort of analysis of his pysche. The guy was clearly a cold-blooded killer but he had a family somewhere who presumably loved him.

Did Strauss have A Mother, father or siblings? Could his family have emigrated from Russia & originally named Ostrowsky or Ostrow?

I've always been interested in Strauss' background. There doesn't seem to be much if anything about him in that regard.