Arnold Rothstein and the 1928 Election. 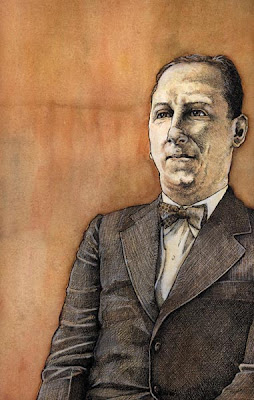 Eighty years ago, on the evening of November 4, 1928, Arnold Rothstein sat at his favorite table at Lindy’s, a delicatessen located between 49th and 50th on Broadway. It was a modest, almost unassuming place, even with its renowned world famous cheesecake. But it held a certain allure with the varying denizens of the Great White Way, and some of its more popular customers included Al Jolson, Harpo Marx, Walter Winchell, and stage performer Fanny Brice, who went so far as to have the cheesecake flown or driven to her during her out of town appearances. The 1920s was known as the ‘Deli Decade’ in New York, mostly Jewish owned, and Lindy’s, which opened in 1921, was the place to be. Rothstein held court there and used it as a defacto office; conducting business over coffee and cake, jotting down numbers in his famous little black books, and took his calls. If he wasn’t at Lindy’s, his table would sit vacant, rarely occupied by anyone else, and never after 9 pm.
It was A.R.’s.

Rothstein spent part of the evening taking bets on the Presidential election, which was two days away. New York’s famous and beloved reformer State Governor, Alfred E. Smith, Democrat, was up against Hebert Hoover, Republican.

Rothstein had his money on Hoover.
The 1920s had been a boom decade of economic upswing and prosperity for Broadway and the rest of America, and much had to with President John Calvin Coolidge and his Republicans in office. They rode the momentum of an already invigorated post-war America that quickly rose to world leadership and power. Coolidge stepped aside, and Herbert Hoover stepped in.

Rothstein always had an eye for a winner.
He knew America was not ready for someone like Al Smith; a gruff voiced son of the Lower East Side; a cigar-chomping Roman Catholic who was soft on Prohibition, who leaned a little to the Left, and has some loose ties early in his political career to Tammany Hall. He was a product of New York City, not America, and Rothstein knew that that fundamental difference went far in the political arena. He was one of us, and he doesn’t have a chance.

Recent events in Rothstein’s life prior to that evening had led to a shaky last couple of months. Things had just not been right. His mind, once sharp with an uncanny memory for numbers and percentages, had grown fuzzy. His slick demeanor and appearance took a turn. He seemed unkempt and sickly, his hands shook all the time, and his confidence faded.

Up until then, Rothstein's criminal career had been a meteoric rise to the top. His powerful influence and notoriety reached far and wide - from the Lower East Side to Harlem and most points in between as well as beyond city limits.
Early on, his father, Abraham Rothstein, a well – respected and religious man whose philanthropic interests earned him the moniker of 'Abe The Just', was troubled by his son's wayward wanderings into the underworld. He tried to have him follow in his good son's Harry's footsteps of academic achievement and rabbinical studies. Arnold shunned it all, apparently claiming,
"Who cares about that stuff. This is America, not Jerusalem. I'm an American!"

He is perhaps most famously remembered in allegedly having a hand in fixing the 1919 World Series with the loss of favorites the Chicago White Sox to the Cincinnati Reds, something never proven and more possibly untrue, but makes for great folklore and newspaper copy.
He saw beyond the rough and tumble ways below 14th Street, using his sharp mind instead of his fists. He always looked ahead of the curve and was one step ahead.

Gambling and numbers were his biggest strength and he had a true talent for it. He made early connections with Monk Eastman and used his muscle as collector on debts owed back to him. Tutelage from Big Tim Sullivan and other political connections allowed him to manage secretly run city casinos that attracted Manhattan socialites and others including Joseph Seagram, the Canadian Whiskey baron. High rollers would lose upwards of $250,000 to Rothstein in a single night.
He watched the Rosenthal – Becker affair like a stage play from the cat walk, never getting his hands dirty but pulling important strings.
He bankrolled early Prohibition operations and speakeasies all over the city, and even financially backed a couple of Broadway plays. One was called Abie’s Irish Rose, whose story revolved around an inter-faith marriage much like his, between a Jew and Irish girl. It was a smash hit. The second, Shuffle Along, was the first Broadway play with an all African-American cast, which nobody else wanted to touch.
He moderated and arranged truces between warring gangs all over town. His ability to move within both the Lower East Side and uptown white-collar criminals was an advantage no one had before and by the age of 46, he was the underworld's golden boy and his orders were obeyed by almost everyone.
He was never arrested and rarely photographed.
He was respected, and reviered.
He taught, tutored, and tolerated.
They called him A.R., The Brain, The Big Bankroll, and he was the original Mr. Big.
Picture early 20th Century New York as the Land of Oz, and Broadway as the yellow brick road.
Rothstein was the man to see behind the curtain.

The evening of November 4, 1928 however did not find Rothstein, a notorious hypochondriac, in the best of mental states. Those endless bags of figs he kept in his suit pocket and consumed daily as supposed brain food, were not working.
And his luck seemed to have changed as well.
He took a call at his booth in Lindy’s from George McManus, who wanted to see him at the Park Central Hotel.

Back on September 8, he had sat down to a poker game organized by McManus at the Park Central Hotel.
The game ended on September 10.
No one seemed sure what happened to Rothstein during the course of that marathon poker game. His judgment was off, he fumbled like an amateur and he raised very high stakes without sure bets in his palms. His edge had dulled somehow and the card sharks in the room noticed as they circled him, waiting for the kill.
He lost $50,000 on a single high- card draw.
His total loss amounted to over $320,000.
Rothstein, livid, slipped them an IOU. and left, promising them a pay off in a day or two, which included the winnings to west coast gambler ‘Nigger Nate’ Raymond, who took Rothstein on that hefty high-card draw and who was showing him very little respect through the entirety of those fateful 48 hours.
While a staggering amount to lose at poker, Rothstein could afford it, but he never intended to pay up. He convinced himself and others around him that the game was rigged and announced he would refuse to pay up.
Whispers and hyperbole now traveled up and down Broadway on how the great A.R. had suddenly welshed on a bet, the one trait he had always despised. Rothstein paid the gossip and back alley talk no heed, and for the following couple of months, sidestepped their demands of payment.

Half an hour after taking his phone call from McManus, Rothstein leaned against the wall next to the service entrance of the Park Central. Blood, which had trickled down the stairs leading from Room 349, was now streaming between his fingers as he clutched his mid - section, his face ghostly pale as he struggled for breath. He asked the service elevator operator to get him a cab, but an ambulance arrived instead.
Rothstein spent two days clutching for life at Polyclinic Hospital.
Detectives urged the dying Rothstein to name the shooter. Rothstein stayed mum, claiming he would take care of it himself.

On November 6, Herbert Hoover took the Presidential Election with a 58% landslide over Alfred E. Smith’s 40%. Hoover even took New York State from Smith, which left him rather devastated.
At the Polyclinic Hospital, Arnold Rothstein let out his last dying breath, winning his final bet, and the lights at Lindy's and along Broadway, dimmed.
Posted by Pat Hamou at 1:34 PM

Arnold Rothstein.... educated, street wise; not university school.
Perhaps the most powerful mobster in history without ever being jailed.
Poorly portrayed fictiously in The Great Gatsby by Fitzgerald as some slob. (a bit anti-semitic?). Still.... one wonders why with that wealth he didn't retire a few years before? We could say that about many.... as in the end only the house wins! I wonder how the marathon card game with Thompson and Nate really went down.