Meyer 'Buggsy' Goldstein before and after... 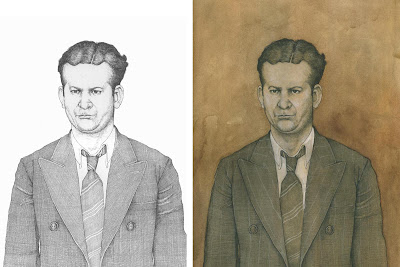 Every so often I like to give a little 'behind the scenes' as to how some of the artwork is approached and how it arrives to its final stroke, as I did here awhile back.
Most artists don't really like to completely reveal their process in order to maintain a little artistic secrecy and keep a little magic in the mix, and rightly so. However, to change things up a little from a regular biographical post - I thought I'd reveal a before and after on this one...

The subject here who has gone from black outlines to final colors is Meyer 'Buggsy' Goldstein, close childhood pal of Abe 'Kid Twist' Reles and a cog in the machine that was Murder Inc.
Goldstein was the lesser know 'Buggsy' in Jewish gangland, obviously overshadowed by the more infamous Seigel; perhaps with the addition of another g to his moniker he hoped to set himself apart from his Manhattan counterpart, but it was rather unlikely anyone would mix up the two hoodlums as Seigel was mob royalty and Goldstein court jester. Born in 1905, he was an original founder of the Brownsville troop and shared second in command duties with Harry 'Pep' Strauss under Abe Reles. He kept close ties to the neighboring Ocean Hill mob led by Louis Capone, to whom Goldstein had originally suggested they reach out to when they were looking at expanding their underworld operations across Brooklyn, and allied themselves with the Italians when they decided to put the Shapiro brothers, Brownsville's original enfants terribles, out of commission for good and share the rewards.

Goldstein was kidded on numerous occasions that actor Edward G Robinson based his on screen gangster persona on the real life Buggsy from Brooklyn. The physical features and stature similarities aside, he also had the same quick quip way of talking and moved along in a duck like walk wrapped in the same tough-guy attitude that Robinson portrayed on screen. Goldstein it seemed started to believe the talk as well - boasting to strangers and family alike that Robinson patterned himself on Meyer from Pitkin street. The probable reality however was when Robinson's (neé Emanuel Goldenberg) star had started to rise in the early 1930s, Goldstein's street success was moving along the same, though vastly different trajectory. The backlots of Warner Bros. studios were along way away from Midnight Roses candy store at the corner of Livonia and Saratoga, and chances are Robinson never popped in for an egg cream and discovered his gangster muse sitting in a corner.

While Robinison's career continued on for many years, Goldstein's star was snuffed out by June of 1941 when he went to the electric chair for the murder of Irving 'Puggy' Feinstein following damning testimonies from former associates Seymour 'Blue Jaw' Magoon and Abe Reles.
Posted by Pat Hamou at 9:10 PM