The Demise of DUTCH SCHULTZ 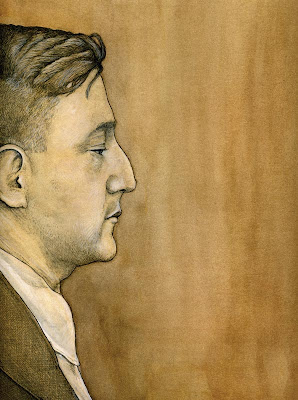 Seventy- four years ago today, Dutch Schultz, neé under the very unthreatening name of Arthur Flegenheimer, was shot down at at The Palace Chop House in Newark, New Jersey a couple of months after his thirty-third birthday.

Schultz still remains one of gangland's most infamous figures in the general public mind.
Bronx born in 1902 to German-Jewish parents, he
remains one of the more undesirable characters in the dark, sometimes blemished legacy left by some of the Jewish crime bosses.

Dutch Shultz’s character traits were nefarious at best, despised yet respected by most of the underworld, and considering the bevy of bad apples that lurked in that netherworld, it was a notable achievement. While the Manhattan syndicate, headed and organized by Charles Luciano, Meyer Lansky, Ben Seigel, Joe Adonis and Louis Lepke Buchalter ran their business like boardroom shareholders; Shultz remained an outsider partly by choice. His position and power as a Bronx bootlegger and a highly lucrative numbers racket in Harlem gave him leverage with the higher ups and he knew it. Shultz was smart enough early on cutting them in on the Harlem slot machines and lotteries as a way of paying tribute.
He only had one rule. “I don’t make money off women or narcotics.”

Still something wasn’t quite right with Arthur Flegenheimer. He lacked the dignity and grace that the new mob bosses were trying to instill after tutelage from the late and powerfully influential Arnold Rothstein. Schultz was a overly paranoid and narcissistic jitterbug at the best of times. Despite his growing wealth he still dressed in cheap twenty-dollar suits and two-dollar shirts as he believed clothes were not worth spending money on. His crew was a ragtag of associates of mostly Bronx bred Jews like himself, non of whom he really trusted except for maybe his numbers man, George Weinberg. He was also quick tempered and complex, running his mouth without impunity of repercussion more times than the downtown boys cared for, but they couldn’t deny his impact and the money that he brought in and he was quietly tolerated. Headstrong and careless, Schultz ran into trouble on numerous occasions with the syndicate in its burgeoning years. He also never shied away from conducting personal violence himself when needed and didn't quite seem to grasp the notion of the boss behind closed doors. His renegade ways harkened back to the wilder days of New York gangland than to the current new order proposed by Luciano and Lansky.

In 1932, Vincent ‘Mad Dog’ Coll, a notorious underworld figure in his own right, was also a former partner of Shultz’s who started hijacking the Dutchman’s beer trucks after the two had a major disagreement about profit sharing. A street war ensued and reached its apex when Shultz lured Coll into trap, sending his number one enforcer Abe ‘Bo’ Weinberg, sibling to George, to rid of the Mad Dog problem for good. Weinberg, who was possibly accompanied by other gunmen, cornered Coll in a drug store telephone booth while he was making a call. Trapped in the cubicle of glass and wood with no means of escape, Coll faced the hail of bullets and so went his demise. Dutch was apparently was nearby to ensure the hit was a success, shook off the incident and claimed, "Just another punk with his hands in my pockets."

Shultz was gathering more heat as well as more newspaper ink as his empire expanded, ignoring Lansky’s rule to stay out of the press. Schultz however seemed to revel in the media attention, feeding his power hungry persona, but it was all catching up with him as he caught the attention of Federal officials. In wake of the highly ballyhooed lock up of Al Capone, law officials were now realizing that tax evasion was a substantial, surefire measure of getting mobsters into a court room without any violence or chase. A simple subpoena proved to carry more weight than a handful of .38 calibers and a carload of G-men. Schultz was finally charged with income tax fraud, and the trial was cunningly moved to the small town of Malone in upstate New York at the request of Schultz’s lawyers to avoid character profiling by a New York City based jury. While awaiting trial, he hired a public relations firm to spread his money and give to charities, all throughout Malone, glad handing and baby kissing like a politician on a crooked campaign trail. He built up his profile as a government scapegoat, a family man just trying to make an honest living and the big city huckster charmed his way into the hearts of small town America. The scheme worked. The hayseeds were hoodwinked and the Dutchman was acquitted of all charges. However, more legal troubles awaited him back in New York. Special Prosecutor Thomas Dewey was appointed to break up the rackets by Fiorello LaGuardia, the diminutive Jewish –Italian Mayor whose heart beat to the pulsing rhythm of mid – 1930s New York through a nine year tenure. His inaugural year included a gang-busting crusade with the Dutchman as his first priority, declaring him the city’s top public enemy on radio and to the press. The syndicate shuddered at all of the sudden attention.

During Shultz's time away in Malone, Bo Weinberg had been secretly making arrangements with Lucky Luciano and others to have Schultz's empire taken over, betting that Dutch would be found guilty and never come back. His philanthropist payouts and mounting legal expenses were draining all profits and Weinberg though best that the entire operation should be handed over to a more even-tempered board of directors. Returning to New York, Shultz soon realized he was outnumbered and overpowered by the syndicate, who had given him ample warning to stay out of the press, which he had failed to do and was now faced with a collected cold shoulder from the mob. Feeling betrayed by associates and squeezed out of his Harlem policy games and restaurant rackets, now in the hands of Luciano, Schultz mentally fidgeted about his next move.

With Thomas Dewey still on his tail, Schultz went across the river to Newark, New Jersey to get out of jurisdiction, lick his wounds and plan his comeback. But revenge burned brighter and his first order of business was specifically Bo Weinberg. Lured by the possible prospect of reconciliation with his former boss, Weinberg agreed to a meet. The most common story, though clichéd and cinematic, was that he was taken for a boat ride on the Hudson and fitted with cement shoes. Shultz apparently broke the news to Abe’s brother George, explaining in colorful underworld hyperbole:
“ Sorry George, we had to fit Abe with a cement kimono.”
Abraham Weinberg’s murder was never solved nor was his body ever found.

Thomas Dewey continued his pressure tactics, proving to be the proverbial hair up Schultz’s ass. Shultz reached a point of breakdown and vowed to have Dewey assassinated, pleading with Luciano and co. to support him in this endeavor. For a brief while the hit was even considered as men staked out Dewey’s daily routines and try to determine the possibility of that deadly scenario. In the end, the Italians, along with Meyer Lansky and Ben Siegel, said it would be bad for business. Lepke Buchalter and Jacob ‘Gurrah’ Shapiro were a little more cold blooded in their opinion but were out-voted. Decidedly, Dewey was too high profile political a figure, and the heat would prove to be too much. Schultz, frothed at the mouth and became incensed, walked out and said he would do it himself, thereby sealing his fate.

On October 23, 1935, Shultz was in the Palace Chop House in Newark, with the only loyal remaining associates Bernard ‘Lulu’ Rosenrantz, Abe Laundau, and Otto Berman at his side. Shultz had been at the Chop House’s backroom every night for the last three weeks, using it as his temporary meeting place, unaware that he was being watched. New Jersey boss Abner ‘Longy’ Zwillman got word of Schultz’s locale to the boys across the river. At around 10PM, the hulking figure of Charles 'The Bug' Workman walked into the back room, guns blazing, while Emanuel 'Mendy' Weiss watched the front door and a driver only known as Piggy waited outside in the getaway car. Schultz’s co-horts were shot down, but the Dutchman, who went to relieve himself minutes before and wasn’t present to witness the initial carnage . Workman stormed into the mens room, catching Shultz in rather unflattering and compromising position and shot him.

Schultz was rushed to the Newark City hospital, where he lay dying and raving for a couple of days, slipping in and out of a coma while police tried to question him about his killers. Strangely enough he asked for a priest for his last rites instead of a rabbi. Two women showed up, each claiming to be his wife. Only one, Frances Flegenheimer, actually was.

Schultz began rambling incomprehensible confessional monologues, all of which were transcribed by stenographers who were by his deathbed in rotations day and night and and filled numerous pages of what seemed art first like underworld babble. Investigators tried to find out who shot him through various question periods but with infection setting in and being in a highly fevered state, most of his responses left detectives baffled.

Dutch Schultz’s deathbed ramblings have become the subject of many curious literary scholars ever since, scrutinized for possible hidden meaning and even seen by some as an untended precursor to the Beat literature movement fifteen years later. Disjointed and at times poetic, they are a curious last exit of words from man not exactly known for any scholarly attributes but someone possibly facing his demons at death’s door.

His final rant lasted a couple of hours, ending with:

"…Look out! Mamma, mamma! Look out for her. You can't beat him. Police, Mamma! Helen, Mother, please take me out. Come on, Rosie. O.K. Hymes would do it, not him. I will settle...the indictment. Come on, Max, open the soap duckets. Frankie, please come here. Open that door, Dumpey's door. It is so much, Abe, that...with the brewery. Come on. Hey, Jimmy! The Chimney Sweeps. Talk to the Sword. Shut up, you gotta a big mouth! Please help me up, Henny. Max come over here...French Canadian bean soup...I want to pay, let them leave me alone..."

Shultz then fell into a coma, and passed away quietly two hours later.
Posted by Pat Hamou at 4:35 PM

Dutch had already converted, and became a Catholic, hence the priest.