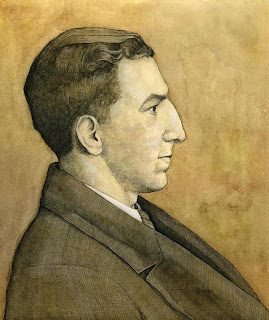 Puggy Feinstein’s small time ways, a double-cross, and a mere fifty dollars owed to a character named Tiny Benson, proved to have a huge ripple effect and end the lives of violent men who thought themselves untouchable.
Feinstein was an ex-prizefighter and not a very successful one. After his nose was broken for the final time, Feinstein exited the ring and found his trouble on the streets of Brooklyn.

Feinstein was mostly a low-level operative; working outside the stranglehold of the Brownsville and Ocean Hill troop with small time racketeering and gambling operations loosely connected to Louis ‘Lepke’ Buchalter. He was considered a weasel by most who knew him, roaming back alleys, scraping up leftovers and had no real prominent place in gangland.

Puggy’s street sensibilities were not sharp enough to survive; perhaps one too many boxing blows to his noggin dulled his judgment when he decided to double- cross the wrong man - Vincent Mangano. The Brooklyn press had dubbed Mangano "The Executioner" when he was head of a powerful family which later morphed into the Gambino mafia ring. He had held a tight alliance with Albert Anastasia. Anastasia, who lorded over south Brooklyn and the borough’s lucrative docks in Red Hook, was also looped in the triumvirate of Lucky Luciano, Meyer Lansky, and Buchalter. For undecernable reasons Mangano was incensed at Anastasia’s close ties to Luciano and the Manhattan syndicate, but he let word out about Feinstein’s miscalculated mischief towards him and sent the word out that he wanted the hook-nosed Jew snuffed through the syndicate's Brookyln strong armed schtarkes.
Under the orders from Anastasia, and relayed by Buchalter, Feinstein was put on the wanted list for liquidation and the Brownsville Murder Inc. troop got the job.

The only problem for members Harry Strauss, Buggsy Goldstein and Abe Reles was no one knew what Feinstein looked liked. They had never even heard of him until they took Anastasia’s call. On the night of September 5, 1939, fate drew them a hand.
Feinstein happened to walk into Midnight Rose’s candy store at 779 Saratoga just near the corner of Livonia, a hangout and de-facto backroom headquarters for the crew. Feinstein was looking for Tiny Benson, a behemoth of a man from whom Puggy had borrowed fifty dollars and was looking to re-pay his debt. Unaware of the price on his head, he spotted three men who looked like characters Tiny would associate with and who were too busy sipping on egg creams to look up, and proceeded to introduced himself. Strauss, Goldstein and Reles, quietly reeling in their luck, said they hadn’t seen Benson but could probably take him to where he was. Feinstein, either fearless or clueless, agreed to take a ride.

An hour later Feinstein was in Abe Reles’ kitchen (while his mother-in-law was asleep in the next room) tied up in a manner that any struggling would tighten the rope around his neck, eventually strangling its victim. Puggy’s prizefighter instincts had come in handy, albeit briefly, as he fought back valiantly and managed to bite into Strauss’s hand significantly before succumbing to successive stabs from an ice pick and self-strangulation. Feinstein’s body was then driven to a vacant lot by Goldstein and set on fire.

A lobster feast dinner in Sheepshead Bay following the murder of Feinstein proved to be one serving of shell fish too many for his killers.

Seymour ‘Blue Jaw’ Magoon, Goldstein’s protégé, had become a man of all trades for the Brownsville crew by the age of 28; stealing cars, racketeering and strong-arm union jobs mixed with the occasional turn as hit man. The trust he gained made him privy to some rather darker dinner conversations, and which would prove to be undeniably damaging to Feinstein’s killers when Magoon eventually joined the singing choir of Reles, Allie ‘Tick Tock’ Tannenbaum, Sholem Bernstein, and Abe ‘Pretty’ Levine who flipped on their crew in the coming year.

Though Magoon wasn’t present at the actual murder and fiery disposal, Goldstein, whose eyebrows were apparently singed, had called upon Magoon right after looking for a ride to return to a garage and pay for the empty can of gas used to ignite Feinstein. Magoon suggested to Goldstein not to return the gas can at all and simply pay for it and tell the owner of the garage it was lost in order to avoid any suspicion from possible prying detectives once Puggy’s crispy remains were discovered. Proud of Blue Jaw’s forethought, Goldstein asked him to come along to the dinner date. They both soon joined Reles and Harry Strauss and the men discussed openly the night’s earlier murderous events over buttered bits of scampi as casually as yapping over a Brooklyn Dodgers game. Strauss was still in a foul mood apparently over the chunk of flesh Feinstein managed to extract from his finger, now bandaged and throbbing, and couldn’t finish his meal. That evening’s morbid repartee would prove lethal in court in less than a year, after Goldstein and Stauss were picked up for Feinstein’s murder following Abe Reles’s song to Brooklyn's DA, William O'Dwyer.

Magoon had no choice but to flip and coroberate Reles’s story. No one had seen him for awhile, especially during the Brooklyn round ups after indictments came down hard and fast with many running for cover. He had been picked up and held in the Bronx for months prior in connection with the killing of Irving Penn, whom Lepke Buchlater had given the go ahead. Blue Jaw was staring at life and or the chair if he didn’t co-operate in the trial against Goldstein and Strauss.

Apparently Buggsy, his ol’ pal and mentor, shook with grief and disbelief when Seymour, unseen for months, walked into court to take the witness stand. He pleaded with Magoon in front of the entire courtroom to “…tell the truth Sey, tell the truth. My life depends on it!” before collapsing back into his chair. Magoon turned white as a sheet, hunched down in the witness chair in a manner where he wouldn’t have to face Goldstein and proceeded to lay out all the grisly details of Puggy’s demise overheard at dinner in Sheepshead Bay. Goldstein stood up in the middle of all this with tears strolling down his cheeks. “For God’s sake Seymour, that’s some story you’re telling...You’re burning me Seymour.” Blue Jaw wept as well and was dismissed after his damning testimony. Goldstein and Strauss, were quickly found guilty and eventually executed on June 12 1941.


My thanks to the Lloyd Sealy Library /John Jay College Of Criminal Justice (NYC) - Burton Turkus Papers, for providing me with source photograph of Irving Feinstein.

His wife was supposedly a very beautiful woman. There is allegedly a color home movie from around the spring of 1939 showing Mrs. Puggy Feinstein in a very skimpy two piece bathing suit at an outdoor cookout in Florida with, among others, Jake "Gurrah" Shapiro. Evidently she was well taken care of after her husband's demise. See Burton Turkus' book, "Murder, Inc." for further info.

Tiny Benson was my uncle. Although I was his favorite nephew, I never knew about his past... I was told he owned a candy store...

Tiny was my grandfather

Hey Ron what ever happened to Tiny?

Tiny, my Uncle Lou, passed away several years ago in Fort Lauderdale.