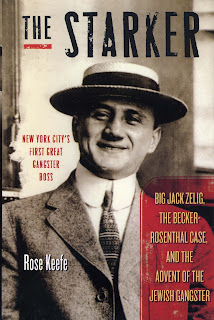 Sunday, October 5 will mark the 96th anniversary of the death of Big Jack Zelig, so I thought it would be rather appropriate to plug Rose Keefe's The Starker, Big Jack Zelig, The Becker - Rosethal Case, And The Advent Of The Jewish Gangster, which has finally been released, and I must say it has been worth the wait.
I'm currently only halfway through but felt the urge to spread the word in the meantime...

Keefe's book expands on what has really been in essence a supporting subplot of the entire Herman Rosenthal / Charles Becker affair. The Starker now brings Zelig to the forefront, with great new insights and information on his early days leading up to his guiding the scattered Eastman gang back on track after a life changing and violent incident in Chicago; his utter disdain for gamblers and drugs; his actual involvement in the Rosenthal case; and to that fateful trolley ride in October of 1912.

Zelig Lefkowitz’s legacy remains a rare one. Not only had he the outmost respect from his gang, but also was considered as a patriarchal figure by the Jewish community of the Lower East Side at the time, the only leading Jewish mobster to do so.
Zelig vowed to protect his neighborhood from menacing Italians who preyed on weak willed business owners, tauntingly pulled on old men’s beards hovering outside of Shuls, solicited young women into the snares of prostitution, and generally bullied the Jewish immigrant populace.
Zelig kept his promise with vigor and affirmative force. Under Zelig’s command, his gang single-handedly extinguished outside oppression experienced by Jews on the streets from the roving band of Italian hoodlums, petty thieves, and pimps. Zelig was hero to most of the people whose old world distrusts of law enforcement and authority had carried over with them to the new land. They had Big Jack as their own protector instead. Even legitimate businessmen who knew of Zelig’s illegal interests couldn’t help but be impressed.
They had created their own East Side Golem in a way.
Anyone with an interest in not just pre-World War I, but overall Jewish Gangster history, and to get a better understanding of the seeds from which it all grew, should seek this book out.

Pat, thank you for the terrific review! It's greatly appreciated, and I'm glad you enjoyed the book!