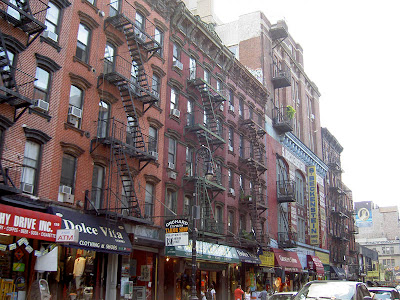 I've just recently returned from a week long trip in New York, partly to do a little research, partly for a little r & r (if that's possible in such a city).

Even way before this project came to be, I've had an on going love affair with New York, ever since I can remember. I still find myself awed by the city every time I visit, and I have been there over the years more times than I can remember. Its monumental triumphs of ego, grandeur, greed, and capitalism never fail to still leave me breathless at times. Perhaps one can only have this perspective by being an outsider, but I'm sure many native New Yorkers feel the same way. Its a city of extremes, and its far from perfect or idyllic; no urban center is or ever will be. But, there is a magical, chaotic beauty to its ebb and flow that is its own.

One of my plans on this trip was to go on a little hunt for historical locations of gangster days gone past - but not really to my surprise, not much is left standing from close to one hundred years ago. Changes come quick in the city and so does the wrecking ball. 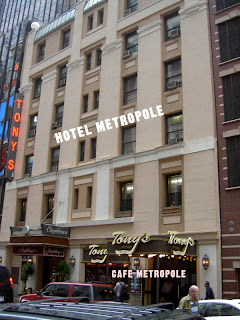 At Herman Rosenthal's gambling house, a three story
brownstone at 104 West 45th St., stands (somehow fittingly) a CitiBank, which takes up a good quarter of the block.
The Tenderloin's fabled 16th Precinct on West 47th above Eight Avenue, where Charles Becker worked out of, and Rosenthal's body was taken to, has gone the way of the ghost as well.
I was happy to see the six story building that was the Hotel Metropole was still standing, located about 50 yards below Broadway on 43rd St. It's now the Casablanca Hotel, and adjacent is Tony's restaurant. This was the location of the Café Metropole where Rosenthal spent the last few minutes of his life before being gunned down outside in July of 1912. Something told me I should go inside an order a grilled chicken salad. So I did, and gave thought to Herman.
The last place Big Jack Zelig was seen alive by his friends was at Segals Café located at 76 Second Avenue, before hopping 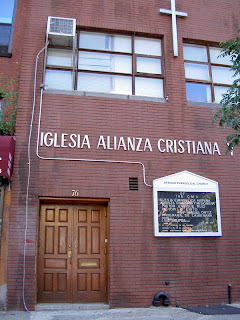 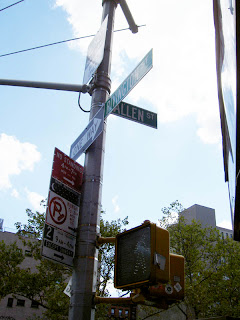 on that fateful trolley heading towards 14th Street. A building still stands, but has given away to religious order.

The corner of Rivington and Allen was a lot noisier the night of September 16, 1903 when the Eastmans and Paul Kelly's Five Pointers were ensconced in major street and gun battle that lasted long into the evening hours. Police stood by helpless with just nightsticks until finally after midnight, with sufficient officers from surrounding precincts assembled, they were sent into the melee and finally managed to break things up.

Eastman earned himself a headline in the next morning's New York Times:

“ MONK EASTMAN‘S GANG RUN RIOT WITH PISTOLS AND KNIVES. “Monk Eastman” and his gang broke their own bloody record for revolver fighting early yesterday when they spread terror through part of the east side governed from the Fifth Street and Eldridge Street Police Stations”. 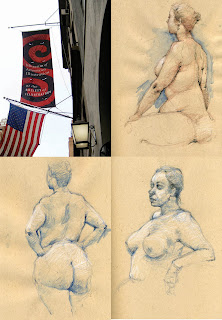 Besides some gangster haunts, I also made my way over to the Society Of Illustrators, a place I had always meant to see and finally got t0 this time around. I also had the chance to participate in one of their life drawing sessions which they hold weekly. There's a nice feeling to be sketching in such an institution whose walls contain a rich history of American illustrators past (and present). Original works by Dean Cornwell, James Montgomery Flagg, J.C. Leyendecker and many more hang on the walls; and there's nothing like ordering a drink at a bar over which hangs a seven foot wide Norman Rockwell painting. It was a special night for me to be there and thought I'd share a few drawings done there and spare you a gangster for now...

Very interesting blog. I hope your book gets published and I will be in the queue for a copy. It should make a fascinating read.

My main interest is Jewish gangsters of the Lower East Side 1910-1935. I recently visited New York partly as a holiday partly to view some of the locations I'd previously just read about. As you're probably aware, during the early 1900s, 344,000 people were living in overcrowded tenaments in one square mile of Lower East Side - one of the most concentrated mass of people in the world. In 1912 Abe Shoenfeld was given the job of checking out and reporting on the Jewish criminals and vice lords of the district and at the end of his assignment, he had written biographical vignettes on approx. 1900 people.

Most of these never rose to the fame of a Meyer Lansky or Bugsy Siegel and details of their lives have yet to come to light. One such gangster was Harry Goldberg who was on the list Shoenfeld sent to his employers of the people from the Lower East Side underworld who regulary visited Segal's Cafe on Second Avenue in the early hours of the morning.

In the 1930s the Combination gave an order for Goldberg to be killed and he had to flee from New York. It's believed that he eventually reconciled matters with the Combination and in 1952 he published a partial autobiography "The Hoods" under his pseudonym, Harry Grey. Harry claimed that the only liberty he took with truth in the book was the death of his friend Max but he was careful to disguise his name and the names of members of his gang. Much of the book was written whilst he was in Sing Sing prison.

During the mid 1960s movie director Sergio Leone read "The Hoods" and spent many years obtaining film rights and getting a production deal. He met with Goldberg on several occasions and in 1984 his movie "Once Upon A Time In America", based on Goldberg's book, was released. It was the last film Leone made before his death.

at least new to me