Not so Lil' Abner 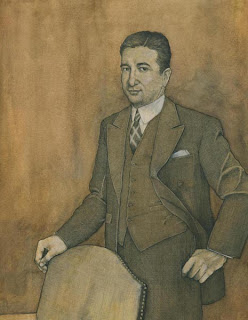 Here is the latest artwork which has rolled off my drawing table.

At the Real Machers exhibit earlier this year, many had pointed out that Abner 'Longy' Zwillman was missing from the rogues gallery, a fact that I had pre- acknowledged but wasn't able to complete in time for the exhibit opening.


Born in 1899, 'Longy' Zwillman earned his sobriquet rather easily, as the Newark native and eventual boss of New Jersey sprouted to the height of 6' 2 by the time he was pushing pushcarts at the age of sixteen. Like his Manhattan counterpart Meyer Lansky, Zwillman built his empire on smarts more than muscle while managing to stay out of the spotlight for a good part of his career. The foundation of his fortune was built on the early successes of winning the bootlegging wars of the Garden State as well as constructing a significant gambling empire during the 1920's. Zwillman was also a member of what was to be known as 'The Big Six' during the 1930s, comprised of Meyer Lansky, Benjamin Siegel, Charles 'Lucky' Luciano, Frank Costello and Joe Adonis. His influence over the underworld rumblings of Newark led to tipping the Manhattan syndicate on the location of Dutch Shultz which ended in a hail bullets at the Palace Chop House in October of 1935.
Zwillman rolled big for a good part of his life, with a handful of influential politicians and policemen in his pockets. New Jersey has had long history of political corruption to this day, and its genesis may be attributed to this lanky Jewish crime boss. He was also instrumental in organizing the infamous 1929 Atlantic City summit, a who's who of national top ranking crime bosses and regarded by many as the birth of American organized crime.

Zwillman's career was a colorful one; a life that included ties to the burgeoning career of Jean Harlow, a reward offer in the Charles Lindbergh baby case, and also as a renowned philanthropist when it came to matters of his beloved Newark with a long list of charity donations in his name.

The Estes Kefuaver hearings in the early 1950s were hard times for top guns like Frank Costello and eventually exposed Zwillman's checkered past, and his legitimate facade soon crumbled in the following years.
The IRS proved once again mightier with its pencil pushers than a handful of G-men could achieve as Zwillman fought off tax evasion charges. His trial ended in a hung jury, but the trial would return to haunt him. Through wire taps and an unnamed informant, evidence came to light that a jury member was bribed to lean in Longy's direction and deadlock the verdict. The FBI prepared a new case against Zwillman with J. Edgar Hoover's personal blessing to forge ahead, but they would never get their man. By January 1959 Zwillman became increasingly withdrawn and depressed due to pending indictments that he knew he could possibly not squirm his way out of. On the morning of February 27, his wife Mary found him hung in the basement of their West Orange mansion, her departed husband still in his striped robe and silk pajamas as a half empty bottle of bourbon sat nearby. Though ruled as suicide, much has been whispered that Zwillman may of perhaps been been murdered under mob orders who suspected Zwillman may of tried to work out a deal in exchange for exoneration of his charges as to not face the remainder of his life behind bars just as he was turning sixty years old.

As a side note : I would like to encourage more comments from everyone! Sometimes it feels a little like I'm working in a vacuum here (though I know you're out there) so feel free drop in with some thoughts or just to say hello! Thanks.
Posted by Pat Hamou at 9:20 PM

for NEWARK AND NEW JERSEY MOB HISTORY CONTACT ME
charming@eclipse.net

Pat...we're interested in your drawing of Zwillman for use in a documentary on his life. please contact me at mjweismann@yahoo.com