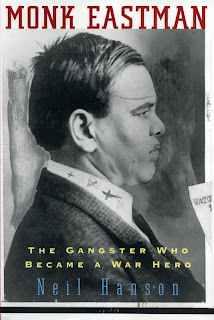 Posts have slowed down (again) considerably due to outside freelance work, but while I prepare a proper new bio to post in the very near future, I wanted to just pass along some information about related news happening around New York and of an interesting new book that has recently been released.

This coming week author Neil Hanson will be making a couple of stops, reading from his book, the first full length biography dedicated to the life of Monk Eastman, entitled Monk Eastman: The Gangster Who Became a War Hero. Five years of research went into telling the tale of Eastman, and it’s also the first time his war experiences with the 106th Infantry during WWI are described in great detail.

I must admit my bookmark is still only at about the halfway point, but since these readings are coming up I figured I’d post about it as Hanson does have some revelatory new information to add to the colorful life of one of Gotham’s most fascinating turn of the century’s gangsters. I suppose perhaps the most vital, at least in accordance with this project, was that it may seem that Monk Eastman wasn’t Jewish at all, a fact also brought forward by Ron Arons in his book The Jews Of Sing Sing a couple of years ago.

It seems ol’ Monk has been looped in and hardwired into the history of Jewish Gangsters for so long, from Herbert Asbury to Albert Fried, primarily because he was the first great leader of a predominantly Jewish gang of almost 1200 strong when he was at the peak of his power. Also, subsequently his leadership was taken over by Jews in his own gang who learned much from him, first with Max 'Kid Twist' Zweifach and then Big Jack Zelig, before the Eastmans finally petered out into different fractions in the aftermath of the Rosenthal/Becker affair and disappeared as dominant force.

Whether Eastman was Jewish or not, he is still a major part of the entire history, a key player much like Big Tim Sullivan was and he's a crucial part to understanding the rise of Jewish gangsterism at the turn of the 20th century. Much more of Monk's early life is brought to light as well in this much welcomed new addition to continuing information that seems to come to the surface even as the years between grow wider.

Neil Hanson will be reading from his book this Tuesday, October 19 at the Lower East Side Tenement Museum, and will also be on hand at the Exhibition Of The American Gangster the following evening of October 20 for a reading and discussion as well.

I've also wanted to re- plug for awhile the Jewish Mob walking tour that happens every Sunday in New York, which is now curated by pal Franklin Abrams in conjunction with The Lower East Side History Project.

To partly quote from the guide:

"Trace the steps of pre-Prohibition era gangsters like Monk Eastman, Max “Kid Twist” Zweifach, “Big” Jack Zelig and Benjamin “Dopey” Fein – pivotal figures in the organizing of crime in New York City; paving the way for men like Arnold Rothstein, Meyer Lansky and "Bugsy" Siegel. Learn about the Jewish immigrant experience on the Lower East Side and the conditions that led to organized gangsterism; visit the sites of gang headquarters, shootouts and assassinations, and learn how the Jewish Mob expanded out of the slums and into a contemporary organized crime syndicate."

For more info, follow this link
Posted by Pat Hamou at 10:37 PM