Boy oh boy times flies.
I seem to apologize every so often for the slow down in posts but maintaining the blog thing can prove to be a challenge sometimes.

Here are a couple of photos of the current exhibit at the Katz Snyder Gallery in San Francisco which seems to be going well and getting a good amount of attendance and reaction. My thanks to all who have dropped by so far.

While the exhibit continues until September 15, there's another good reason to be in the Bay Area this summer.
The San Francisco Jewish Film Festival has programmed a series called Tough Guys : Images Of Jewish Gangsters in Film.
Screenings will include Warren Beatty's Bugsy - his loosely adapted bio of Ben Siegel; but the little gems are screenings of the rare Lepke (1975), starring Tony Curtis, and King Of The Roaring 20's - The Story Of Arnold Rothstein (1961) starring David Janssen. Both films have yet, and may never see, the DVD treatment - so if you get a chance to see these do yourself a favor. I can't vouch for King Of The Roaring 20's, as I've never seen it, but I do have an old VHS copy of Lepke and though the film feels a little dated, it holds up.

Also screening will be Howard Hawk's classic Scarface (1932) starring Paul Muni - and the reason for this screening is Muni, along with Edward G. Robinson, were Jewish actors and graduates of New York Yiddish theatre who played Italian mobsters on the screen during the height of the gangster film genre. Though actual newspaper headlines of the times splashed the prominent names of Dutch Schultz, Louis Buchalter and others, film audiences of the '30s were not ready for the representation of Jewish mobsters on the silver screen, nor were the studio chiefs, most of whom were Jewish.

Missing from the programming but easily viewable on DVD is Murder, Inc. (1960), whose script and pacing is rather plodding, but a young Peter Falk makes for a convincing Abe 'Kid Twist' Reles. Also, and possibly the quintessential Jewish mobster film, is Sergio Leone's sweeping and epic Once Upon A Time in America, starring Robert De Niro and James Woods as two Lower East Side kids who rise up in the underworld on their own terms.
The film festival runs from July 24 - August 9.

The SFJFF has also been nice enough to support the ongoing exhibit and will screen these following promotional graphics that I put together for them prior to films screenings.

My thanks to Nancy Fishman, who curated 'Tough Guys...' for all her support and help in making all this happen. 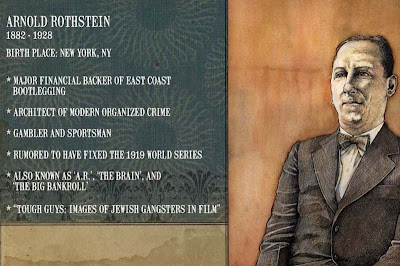 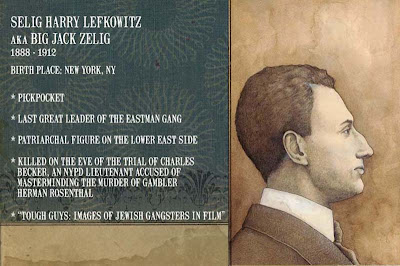 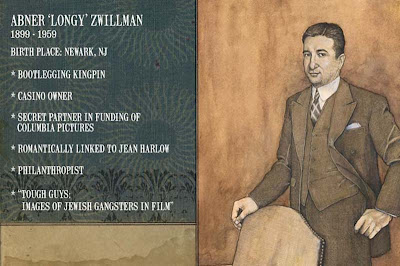