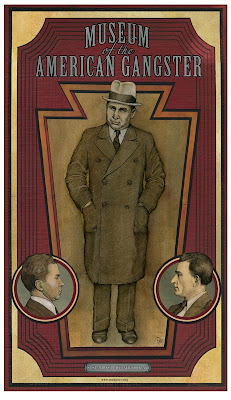 Posts have slowed a bit in the last little while but with good reason, as this has been one of the results:
Here is a peek at a poster I've illustrated and designed especially for the Museum Of The American Gangster in celebration of their inauguration.

There will be announcements soon about the Museum's official opening in New York City, which is slated in the near future and I will have an update on my involvement as well.

In the meantime you can sign up at their official facebook page to receive regular updates: MOAG

I will also announce within the next couple of weeks of yet another exhibit I will be involved in once the official press release is set loose upon the world, but for the time being I've been asked to be hush hush about it...so stay tuned.
Posted by Pat Hamou at 10:21 PM