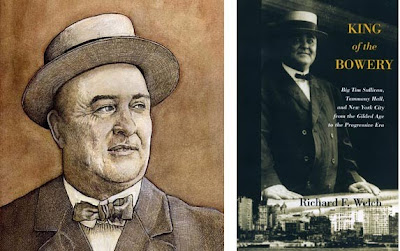 A quick note to let those in the NYC area that author Richard F. Welch will be at the Lower East Side Tenement Museum this coming Monday, March 22 at 6:30 PM as part of their Tenement Talks series.

Welch's recently published book 'King Of The Bowery - Big Tim Sullivan, Tammany Hall, and New York City from the Gilded Age to the Progressive Era' (now that's book title!) is the first long-overdue biography of one of New York's most colorful and controversial politicians from the turn of the century and proved to be an enlightening read.

As I've mentioned before, the tall Irishman known for his twinkling blue eyes, was a key player in shaping the roles Jewish gangsters would play early on. While painted by some as the epitome of the crooked politician, Sullivan, who was also known affectionately as 'The Big Feller', was truly a walking contradiction; giving as much to charity as he took in from an endless bounty of graft. He was also unquestionably progressive and responsible for early women's rights movements and pushing proper labor practices.

Despite both the lives of Arnold Rothstein and Herman Rosenthal ended in bullets, each had taken different trajectories in success and failure, and both owed much of their start to the patronage offered by Sullivan. But Sullivan didn't just help Jews who walked the crooked line. Big Tim knew that Jewish patronage was of key importance, especially since so many lived in his district, and he had more foresight than most of his fellow sachems when it came working with them. According to Richard Welch, Big Tim was one of the first Democrats to bring Jewish professionals into his fold as advisors at a time when most Jews were still frowned upon aand objectified as socialists. Sullivan's helping hand extended to include Max Steuer, who became one of Tammany's, and New York's, most successful lawyers, and as of 1909 - Henry Applebaum, who served as Sullivan's personal secretary and close political operative up until Sullivan's death.
Big Tim Sullivan's life ended tragically in the fall of 1913, in the wake of the shooting deaths of Herman Rosenthal and Big Jack Zelig the previous year. His passing also marked the end of an era of shaky but reliable alliances between Gotham's Jewish gangs and Tammany Hall.

There is much more to Sullivan's life so those with any interest should pick up Richard Welch's book and if you are not geographically challenged, drop by the Tenement Museum this coming Monday.

I will have more news coming soon in regards to my involvement with the Museum Of the American Gangster. While the Museum is now open for previews, the exhibit space will only be ready in the coming weeks so stay tuned for updates.
Posted by Pat Hamou at 8:26 PM

Good idea! Nicky Arnstein was a very impotant figure of the time, as was Big Tim...and many at five points. Too bad so much has been ripped apart and gone forever.
There should be a site with at least some pictures of the old "Five POints" buildings.

There were many Jews that lived in the lower east side....