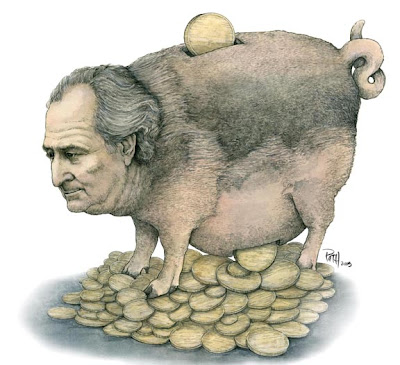 Bernie Madoff's sentencing yesterday of a 150 years came just as I was putting the finishing touches on this caricature illustration which was intended as a promotional portfolio piece.
The timing was a little eerie to be honest as the idea had been sitting as a half finished pencil sketch for a couple of months before I decided to buckle down and get it finished.
While the nature of this blog obliviously focuses on the Jewish gangsters of years gone by - I thought this was too topical and coincidental to not to include here.

Historical fact and gangland folklore generally finds itself blurred between the lines when discussing larger than life figures of the past like Arnold Rothstein or Meyer Lansky - probably the wisest and sharpest of all of the Jewish gangsters. Perhaps time has been kind to them and are held in nostalgic regard because they had reached their heights without ever pulling a trigger and were admired for bucking the system.
However, the worlds of Rothstein and Lansky were insular, their victims lurking within the confines of its own walls with choices made by people who understood the risk they took by entering its labyrinth. It was an invisible box, seen only by specific eyes, and in which the general public was seldom involved or victimized.

History will not be so kind to Bernard Madoff however, as his victims were not naive gamblers, hotheaded hitmen or rival bootleggers. Madoff's victims were innocent people who had put their lives (financial and otherwise) into his hands and saw their worlds crumble.
Madoff was not obviously a 'gangster' in the traditional sense - but perhaps something even worse.
Posted by Pat Hamou at 7:49 PM