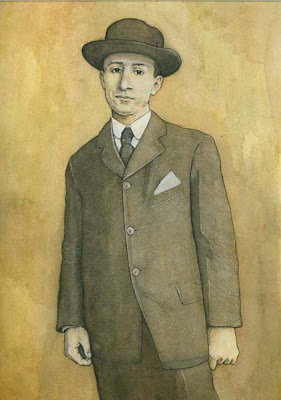 With the onset of the new baseball season upon us, 2009 will mark the 90th anniversary of the infamous Chicago White Sox World Series scandal.

Also, in case you've been wondering who that fellow in the top banner is, I thought a brief overlook at one of the possible conspirators behind the scenes of what was dubbed 'The Black Sox' scandal in its aftermath, was due.

Abe Attell’s place in Jewish Gangster history is more of a peripheral one.
As a young Jew living in a predominantly Irish neighborhood in San Francisco, he found himself on the defense on more than a few occasions.
Little Abe soon became adept with his fists as a result.

At the age of 13, his father left the Attell household to never return. Abe went out and sold newspapers to help support his family and it was then that world of boxing opened up to him.
His street fighting skills were put to use in the gym and Abe showed talent as featherweight class fighter. He won his first fight in 1900 in two rounds and quickly gained the nickname of "The Little Hebrew", complete with a Star Of David stitched onto his shorts.

In a mere three years, Attell won the Featherweight Championship at the age of only 18.
He lost his crown after only his second defense but regained it quickly thereafter and and held off 18 challengers in a row, a record held until 1983.
The Little Hebrew was also now known as The Little Champ.
His boxing career extended, though checkered at times, until 1917 when he took his gloves off for the last time at the age of thirty-three.

There’s a good chance back in New York, Arnold Rothstein made a few well-placed bets on Attell’s fight and made substantial amounts money off the results. The two eventually met and became quick friends, not such an easy thing with the notoriously private and solitary Rothstein. Rothstein had had a succession of bodyguards and employed Attell to be at his side when needed. Though Rothstein oversaw much of the Manhattan underworld and was respected on all fronts, enemies in the shadows were always a hazardous part of the equation.

Attell still had his ear to the undercurrents of the sports world despite his new gainful employment, which led to his involvement one of sport's largest scandals, the allegedly fixed 1919 World Series involving players of the Chicago White Sox.

Known as the Black Sox scandal, Attell was accused of being in on the planning stages, relaying money back and forth and getting word and funding from Arnold Rothstein. Rothstein’s name has become synonymous with the scandal ever since, that the fix was his doing, though he was never actually proven guilty of the deed.

It made for great newspaper headlines however and Attell, Rothstein, along with the eight White Sox players involved were dragged through the mud from commission hearings. The players didn’t fair so well, all booted out of the league and blacklisted, keeping star players such as "Shoeless" Joe Jackson out of the Baseball Hall Of fame to this as day.
Attell and Rothstein walked relatively unscathed with nothing more than a little bit of bad newspaper ink. Attell’s true involvement is not known, and of course he pleaded his innocence in court, though he seemed to have enough insider knowledge to let Rothstein know who to place his bets on.

After Rothstein met his end at The Park Central Hotel in 1928 Attell was direction-less and floated without knowing where to land for awhile, perhaps feeling somewhat lost without his old boss.

Sports remained in his blood but for some reason he remained on the wrong side of the line.

In 1929 he was arrested for scalping fight tickets but beat the rap.

1931 saw his name in connection with $100 million a year bootlegging operation in New Jersey.

He soon however found the straight line and opened Abe Attell’s Steak and Chop House at 1667 Broadway.
He even made an appearance on the quiz show, The $64,000 Question, along with a few other boxing old timers, with the irony being that the overall game show was eventually exposed as fixed.