The Other Mr. A 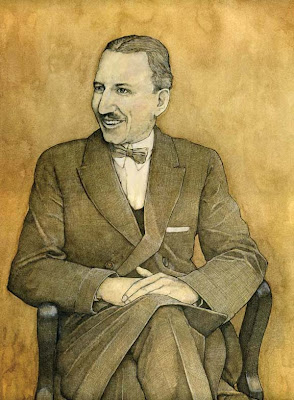 With all the recent news on the woes of Wall Street and the arrest of Bernie Madoff and his 50 Billion Ponzi scheme, a modern day ‘Jew Behaving Badly’ if there ever was one, the incidents in question made me think of the colorful and charismatic Nicky Arnstein and his own Wall Street caper.


Arnstein was not completely kosher.
His father was a Berlin born Jew, while his mother was Dutch, and who from Arnstein possibly may of inherited his 6-foot plus lanky frame, a rarity in vertically challenged Jews of the time. Young Julius earned his nickname of ‘Nicky’ from the nickel-plated bicycle he raced during the 1890s, when the sport was all the rage. While his long legs pumped him to his fair share of finish lines, Arnstein was lured away from sports by the dawn of the new century and started to chart more deviously criminal waters.

Nicky Arnstein spent a good part of his mid-to-late twenties as trans-Atlantic shark preying on the unsuspected and gullible. He was charming crook who earned himself the title of ‘confidence man’, a term later shortened to ‘con man’. Hopping aboard luxurious ocean liners with glamorous European destinations, Arnstein swindled and cheated his way through the upper and lower decks hosting various card games and gambling tricks. His one of many advantages was that he was no rough and tumble scallion from the Lower East Side; he came from New York upper crust middle class stock; articulate, well mannered, dressed and read. His wealthy victims were seduced by his toothy grin and sharp wit, and one such traveler, warned of Nicky’s wayward ways, was quoted:
“I don’t give a damn. He’s better company than anyone else aboard ship.”
Arnstein managed to stay out of trouble as long as his sea legs held up, but when he decided to dock into Manhattan’s harbor for the last time, his luck it seemed had remained lost at sea.

By the early 1910s, Arnstein was involved in minor clumsy swindles but nothing much ever panned out. His newfound alliance with Arnold Rothstein during this period made complete sense however. Both were from same side of the street and similar privileged backgrounds. While Rothstein was as shrewd as they come and distrustful of most, the charm and intelligence brimming from Arnstein must have been most welcoming to him in a business riddled with thick- necked thugs and narrow mindedness. To what extent Rothstein employed Arnstein is vague, but The Big Bankroll probably enjoyed having him around.
During this period, Arnstein also met Ziegfeld Follies' top star Fanny Brice (née Fania Borach), with whom he fell head over heels in love, seemingly forgetting he had a wife at home already. Brice’s ragged edges, Yiddish street-wise sensibilities, and biting wit completely charmed the charmer, and the two became quickly inseparable. She was also drawing large salaries at this point as well from her touring schedule and spotlight on Broadway, and being a 'kept-man' probably suited Arnstein just fine.

Arnstein spent most of 1916 behind bars at Sing Sing on a swindling conviction. Brice would visit him on a weekly basis, despite the newspaper stories of her torrid jailbird romance. Arnstein’s ‘bon-vivant’ character continued up river as well, where he was given light duty and appointed prison librarian. In 1918, Arnstein became Mr. Fanny Brice, after his former wife. Claire, granted him a divorce (and whom sued Brice for ‘alienation of affection’).

In the fall of 1919, $5,000,000 in bonds was stolen through a series of holdups of Wall Street messengers carrying securities from one brokerage house to another. As the investigation followed, somehow along the way, Arnstein was pegged as one of the ‘masterminds’ behind the act. When word reached Brice, she chortled loudly:
“Mastermind! Nick couldn’t mastermind an electric bulb into a socket!”

When word reached Arnstein of the possible charges, he was a little more nervous than what his dear Fanny alluded to the papers. With the underworld whispering into his ear that the police was looking for him, he went into hiding. It seemed, according to the Wall Street gunsel when finally picked up, that a mysterious ‘Mr. A’ was behind the holdups, and picked out Arnstein’s photo from a rogues gallery. Arnold Rothstein was also known as Mr. A in some circles, so in there lays the possibility of mistaken identity and or cover up by all involved.
Perhaps looking to protect Rothstein, and whether guilty or not, Arnstein went into hiding. Not even Fanny Brice knew where her man laid his head at night. Arnstein secured the services of lawyer Bill Fallon, known as "The Great Mouthpiece" for his unbreakable streak of winning cases and orator skills. Fallon made arrangements for Nicky’s surrender, who would give himself up only as a gentleman and not as scoundrel. Arnstein insisted not to be taken away in cuffs, to have food sent to his cell from his favorite restaurants, allowed to dress in his own clothes, and would show up to the steps of the police precinct of his own accord. The papers relished in Arnstein’s comedic arrogance, and the NYPD fumed but agreed since they had no luck finding sly Nicky on their own.

Arnstein’s surrender was one of movie magic. He had picked the day of the annual Fifth Avenue police parade, and there was no way he was walking into Headquarters with only a few low level policemen on duty who awaited his arrival. With a reporter from the New York World and Bill Fallon in tow, he hired a top down town car with chauffeur. With pitch perfect timing, Arnstein’s car turned down Fifth Avenue and followed the last platoon of the parade, waving and smiling that infamous toothy grin to the throngs of people lining both sides of the street, most of whom had followed his story with relish in the papers, and joyfully cheered him on. Mayor Cadwallader D. Colden, the Police Commissioner, and other city officials were not amused, angered beet-red by Arnstein’s showmanship, disregard for procedure, and offhanded candor of the serious charges. With a final bow to his fellow New Yorkers, Arnstein ordered his chauffeur to drive to police headquarters.

Arnstein, along with four others (including an inside man) were eventually found guilty of organizing the robberies in a trial that took place a year later in Washington D.C. and ended on May 4. 1921. It was the first of two trails involving Arnstein and the scattered paper trail of stolen bonds. Arnstein was finally sentenced to Leavenworth prison on Federal charges.
Fanny, who stood by him through all of it, and sang “My Man” at all her shows in his honor, divorced him upon his release in 1927. Seems Fanny found out that despite his grand love for his Broadway baby, Nicky couldn’t help sidestepping on regular occasions and was unfaithful.

Arnstein disappeared from public view shortly after his release and subsequent heartbreak. Perhaps the murder of Arnold Rothstein in 1928 sent big enough signals to get out while he could as well.

In 1964, a year before passing away, a possibly frail yet still dandy 84 year-old Arnstein may of attended the opening night of ‘Funny Girl’ on Broadway, the story of Fanny Brice and Nicky Arnstein, and smiled that famous grin all over again. Produced by Brice’s son-in-law, it reached even wider audiences on celluloid in 1968 with Barbara Streisand as Fanny Brice and Omar Sharif standing in as ol’ slick Nick.

Just re-watched Funny Girl. Although portrayed as more of a victim in the film, the character was not too far off the mark with regard to the actual Arnstein. Very Interesting.