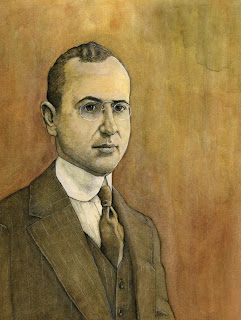 Up until now, the entire focus of this project has been on the criminals; the thugs and the bosses; the schtarkes and the schmucks; and other slithery and slippery hard-boiled Hebrews. While the law and the Jewish community of the time did its best at wrangling up these miscreants and misfits, with whom we can’t help and be fascinated with, a tip of the hat is long overdue to one man during this particular period – Abraham Shoenfeld.

Abe Shoenfeld was the original Shamus – a detective and investigator hired on by The Kehillah (Hebrew for ‘community’) to head up The Bureau Of Social Morals in 1912 following the now infamous murder of Herman Rosenthal. The Kehillah was set up initially by well to do uptown Jews of mostly German descent as a means of unifying New York’s quickly expanding and diverse Jewish community, and to help ease the social and economic challenges they faced.

Founded in 1908, The Kehillah set up an impressive number of bureaus that included education, philanthropy, industry, religion, and eventually and reluctantly, social morals. Crime had been a growing problem since the turn of the century, but was kept and controlled at street level and confined to the Jewish quarter of the East Side. The aftermath of the Rosenthal murder in mid-town near Times Square, brought the simmering problem to a boil through much, unwanted public and press attention, and The Kehillah needed some damage control.

Born April 24, 1891, Shoenfeld worked for the NYPD as a secretary to a deputy commissioner, and was a member Mayor Gaynor’s clean and sweep administration that were trying put a spit and polish back on a very tarnished Big Apple. It was during this period he became involved with The Kehillah. Noted philanthropist and wealthy banker Jabob Schiff hired him directly to delve into gambling and prostitution on the Lower East Side as well as other dark haunts in the city. Schiff may have assumed a Jewish investigator would of assimilated more easily incognito into those surroundings than a detective named Fitzpatrick or O’Malley. We’ll deal with our own, so to speak.

He reported his findings and sent tips straight to the Mayor’s office and the NYPD who then proceeded with numerous raids and arrests. While organized gangs were a little harder for him to back into a corner, he did seem to hold begrudged respect for bosses like Big Jack Zelig, of whom he couldn't deny the impact the leader had on the community as a defacto protector of the neighborhood. The undeniable affirmation of Zelig’s infinite legacy and influence among the downtown Jewish population proved evident in the impressive attendance for his funeral in October of 1912, of which Shoenfeld observed and reported on.
He was personally impacted the most by the state of prostitution carried out by many young Jewish women, and the dangerous conditions and unhealthy lifestyles they lived which appalled Shoenfeld to no end.

Shoenfeld’s detailed reports since then have proved repeatedly to be invaluable source of research for all crime historians who have unearthed the stories of the Jewish criminal class. His papers are now archived at The Central Archives for the History of the Jewish People in Jerusalem.

While much of the historical attention of Jewish crime generally focuses on the gangsters themselves due to their colorful lives of lawlessness and social abandon of the norm (I also share in that guilt), I believe it’s important not to forget Shoenfled’s work and contribution to the betterment of the cause as an important counterbalance to all these gangster tales. He remains an unsung hero of the time, though the impression I get from some documents provided to me by family members would be that he would probably shrug that honor off; humble and hardworking in hopes of simply making a difference his only agenda. There is much more to share of his life and work however, of which I will hang on to for the time being and wait until pending publication as to not give everything away.
I must send out my sincere thanks to author Rose Keefe who put me in contact with Abe Shoenfeld’s great niece, Ellen James.
I would also like to thank Ms. James and her mother, Thelma Sickles, Abe's niece from his sister Rebecca, for sending me reference photos and documents to work from, so we can finally see what the man looked like and give him his due.
Posted by Pat Hamou at 11:02 PM